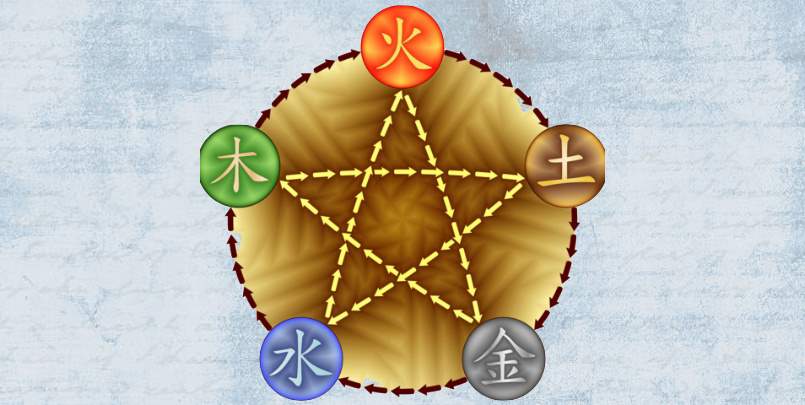 Five Element theory originated from the Taoist tradition. The creation of this 5000 year old theory was based on the Taoists pursuit of obtaining immortality. They believe that immortality can be achieved when one lives in harmony within the universe. The theory begins by first viewing life as a circular force. This force can be seen in the processes of inspiration to expiration-of taking in then sending out- and giving then receiving. These actions create a rapport with what is known as the Yin/Yang forces. Yin being dark and receptive whereas Yang being light and active. Everything in nature carries these two qualities- they are within us and surrounds us.

These Yin/Yang qualities are further found in the five basic elements that permeate our universe. These elements are earth, wood (air), fire, water and metal (ether). These five elemental qualities inter-relate to one another to create and destroy nature in order to achieve this balance and maintain harmony. Despite western medicine’s advances in technology, the reality is that all forms of healing still rely on the elements in order to cure.

Five element theory states these elements are impermanent and that this is the nature of the life. Because of their honoring impermanence, there is a keen awareness of the cycles of life. In growth, a seed germinates into sprouts until it blossoms and bears fruits, then it decomposes. From their elemental perspective, the life cycle begins with water nourishing wood, wood then feeds fire, burnt wood turns to ash thus returning to the earth and disintegrating into the minerals of metals.

Being a shamanic culture, the Taoists further believe that these five elements that make us up also carry with them five spirits that return to the heavenly and earthly realms when the elements ultimately dissolve. These five spirits are said to reside in our five primary organs. The Taoists see these five spirits as bits of heavenly light that drop down into matter and take some of its weight and form. Through the contact of matter, the spirits become moistened by the essence of the earth and move through us as we breathe. As they accumulate color, moisture, and form, they take on a subtle body that is neither pure spirit nor pure matter. This forms our subtle body known as our soul. When the five spirits are in a state of harmony we live at a positive, high frequency state of virtue. But when the organs are not in optimal condition, the spirits come to a state of disharmony causing negative emotions as well as disease. In extreme cases, the spirits of the organs can flee causing soul loss.

Using this five element approach blended with Reiki and shamanism, the intent of this healing work is to create a peaceful environment within the organs in order for the spirits to comfortably remain in their peaceful, virtuous state. Therefore, instead of cutting parts out of the body or giving medicines that create further side-effects, this approach looks at nature as a whole within our own being in order to heal.

Sorry, the comment form is closed at this time.

Receive $50 off your Amen Brain Health Assessment when you purchase Pure Encapsulation or Amen Clinic Supplements.

WELCOME TO SACRED TRANSFORMATIONS
Sign up for Program Dates, Special Offers and Healing Tips!
Your Information will never be shared with any third party.
SIGNUP NOW!
×